Yamuna, the daughter of Lord Brahma, the Creator, is said to be one of the holiest rivers in India. Just like Ganga, this black beauty is also said to be the epitome of ‘tranquility’. Ever knew which raga must have been named on this river, and reason behind such nomenclature? Well, you already know by now – it is raga Yaman. This raga is said to be one of the most important ragas of Hindustani music. This raga is known for the creation of a ‘sky of tranquillity’, full of ‘stars of happiness’. Moreover, unlike the Yamuna, none of the banks have the ability to restrict its spread.

Yaman is a heptatonic raga, and also the primary raga of Kalyan thaat. Being one of the most fundamental, and basic raga, this is the first raga to be taught to students learning classical music, as there are no komal swaras in this raga. In many traditions, this raga is taught even before raga Bilawal.

The aarohan to this raga is
Ni Re Sa – Ni Re Ga ma Pa Dha Ni Sa’
The ‘madhyam’ of this raga is teevra. Aarohan starting from ‘Nishad’ adds to its beauty

Raga Yaman Kalyan, which is another form of yaman, can be considered as the ‘doppelganger’ of this raga. This raga, and Raga Yaman have the same Avarohan, and the only difference in the Aarohan of these ragas is the Starting note. That is, the starting note of Raga Yaman Kalyan is ‘Sa’.

Another twin of this raga is Raga Bilawal – The raga behind iconic compositions like ‘Ik Pyaar ka Nagma Hai’ and ‘Chhu Kar Mere Mann ko’. Yaman will be produced if one takes the madhyam of Bilawal and begins the scale from there. This raga is analogous to the Lydian Mode – the fourth mode of western music. 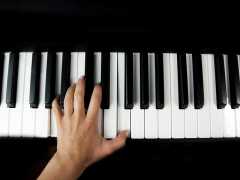 An interesting fact about this raga is that this raga can be played completely on white keys of a Keyboard, which makes it self-explanatory that this raga remains to be a raga with the simplest structure. But, as they say, ‘Appearances are Deceptive’. It requires a skillful, well-trained, and

flowing voice in order to get the real beauty of the raga out of it. According to many sources, this raga is said to be crafted by Amir Khusro, the great musician and poet of his time. Moreover, the name is also said to be derived from the persian word ‘Ei’man’.

As I mentioned above, this raga provides a feeling of tranquility. So, the rasa of this raga is Shaant rasa. This raga provides a feeling of contentment, similar to what one gets on enjoying scenic beauty, or living the time of his/her life with friends, family, or the ‘lucky one’. This is said to reside under the skin of the ‘evening sky’, and said to be rendered at the time when lights are put up.

Yaman and Yaman Kalyan has given some of the best compositions to the Indian music industry. ‘Inhi Logon Ne’… the all-time favorite composition from the award-winning movie ‘Pakeezah’… is based on Raga Yaman Kalyan. This raga has also been the foundation for the song ‘Aaye Ho Meri Zindagi Mein’ from the movie ‘Raja Hindustani’, for which, Nadeem-Shravan (the music director-duo) won the 20th Filmfare for the best music. A renowned song from the movie ‘Chitchor’ named ‘Jab Deep Jale Aana’ has derived its roots from Raga Yaman.

This raga has an unknown element, which is potent of providing a feeling of completeness, rejuvenation, and tranquility altogether. If you want to discover the depth of this raga, I suggest that you listen to the compositions on this raga by music maestros like Pt. Bhimsen Joshi, Pt. Jasraj, and Late Ustad Amir Khan. Do listen to it, guys!

One thought on “Yaman, The Raag of Tranquility – Raganation”